As Glave yelled from the open hatch, time seemed to slow to a crawl. Frost-Bow dragged Hate’s chassis towards the jury-rigged life pod, inch by desperate inch, blaster fire impacting all around him. The Stormtroopers were clearly unaware of the countdown being spoken calmly into the Rebels’ ear bead communicators, as they were continuing to act according to their conditioning; namely, blast everything not Imperial! Seeing his comrade in peril, Kibu yelled a war-cry and leaped into the fray. As Glave looked on in amazement, trying to draw a bead with his blaster, Kibu vaulted onto the shoulders of one Imperial and stabbed through a weak armour joint, bringing him down. As he fell, he used the momentum to propel himself at head height towards another Trooper, spear held out in front of him. With a sickening crunch, the point skewered the unfortunate Trooper through the eye piece and he too fell to the floor. As Kibu rose to his feet in triumph, he failed to see the final Imperial squad member behind him, blaster raised to fire. Giving the surprised Ewok a wink, Glave blasted the soldier, sending him flying backwards. Seeing how close he’d been to meeting his Ancestors, Kibu saluted Glave before heading to Frost-Bow’s aid. As they dragged Hate’s ruined chassis forward, they discovered that the droid’s vox unit was intact as it reminded them of their impending doom. 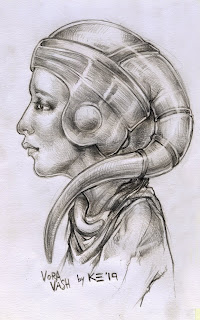 As blaster fire impacted on the other side of the life-pod, Glave risked a quick glance to assess the situation. The remaining Stormtroopers had recovered from the life-pod’s sudden appearance and were methodically pounding it with blaster bolts. Immediately behind the Imperials was the hangar’s main blast door. As the countdown continued, Glave caught a glimpse of a vac-suited Vora dodging down a side tunnel towards the recreation area, accompanied by Commander Ackbar. As time ticked down, Glave tried to reason with the Imperials, telling them to throw down their weapons. But their conditioning, combined with their ignorance of the impending reactor overload, meant that their only response was a further burst of blaster fire. ‘Stuff ‘em, then’ snorted Glave and he returned fire. Still, the blaster fire looked as though it was going to render the ‘pod useless until Glave heard a battle cry: peeking above the hatch, Glave saw Pollard charging into the midst of the remaining troopers, bringing three down in as many seconds before Glave lost sight of him in the ensuing melee. 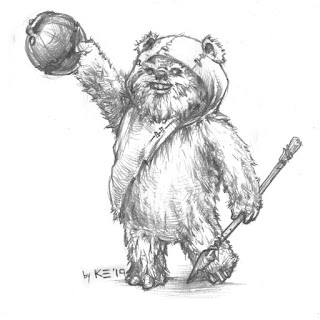 Taking advantage of the distraction, and with only seconds to spare, Vora and Ackbar appeard in the hangar bay’s side entrance and sprinted to the ‘pod. Dragging their crewmates with them as they passed, they piled into the open hatch before slamming it shut behind them. ‘Go!’ yelled Vora, her voice cracking with strain, but Glave needed no encouragement. Breathing a prayer to the Force, he deactivated all the repulsorlift limiters at once and the ‘pod practically leaped out of the hangar bay, careening off the floating wreckage of the Imperial Assault Shuttle as it did so. This mistreatment was all that the ‘pod could take and its interior was plunged into darkness as the power failed. Before the emergency lighting could flick on, however, a blinding light poured in through the viewports as the countdown came to an end: the asteroid was immediately vapourised, along with all of the remaining Imperials. With a  look of satisfaction on her face, Vora settled down to wait for whatever was going to happen next…

Despite Glave and Vora’s best efforts, the life-pod’s abused systems refused to give them control over its movement. Instead, they were forced to content themselves with the fact that life-support seemed operational. A steady, blinking light also showed that the pod’s distress beacon was transmitting, sending out their location on a range of secure frequencies to any nearby Alliance vessels. However, the crew’ natural and understandable paranoia won out and Hate’s advanced sensor suite was linked into the pod’s, enabling the droid to survey the surrounding volume of space for any threats.

After what seemed an interminable wait, Team Wraith and Ackbar were picked up by a Verpine vessel and welcomed aboard. Without ceremony, they were ushered into the presence of the leader of the Verpine Hive, a tall, grey-carapaced alien known as Speaker Jurfel. Ackbar and Jurfel greeted each other warmly, but quickly turned to the business at hand. Although the team had managed to obtain the vital B-Wing design files, the Empire still had possession of two fully-operational three-person B-Wing prototypes. These had been kept at Shantipole Station, a much larger Verpine research base that had fallen to Imperial forces in the last few hours. Furthermore, the Imperial fleet had massed around the Roche asteroid field and had threatened the Verpine with annihilation. As a result, the Verpine had declared for the rebellion and were concentrating their fleet for an escape attempt.
Turning to a glowing holo-display, Ackbar thought for a moment, his large eyes blinking slowly as he considered the Imperial and Alliance dispositions in the sector. After a moment, he stabbed out a webbed digit. ‘Here. Here is the weak point Speaker Jurfel. A single Nebulon-Class frigate is holding the Imperial line here; if we can disable it, the Verpine fleet will be able to escape the Imperial net’.

For a moment, Jurfel and Ackbar bent their heads together in discussion. Turning to the waiting crew, Ackbar’s expression was grave. ‘We have several problems that only you can solve, Team Wraith. We need to obtain an armed ship to help us break the Imperial blockade. We need to retrieve the B-Wing prototypes before the Empire can reverse-engineer them and remove our advantage. Also, we need to make sure all of the B-Wing data has been put out of reach of the Empire. All of these problems can be solved if a crack team can infiltrate Shantipole research station.’ The crew looked at each other uncertainly, before Glave spoke up hesitantly. ‘Well, I suppose we might be able to…’

‘Excellent!’ exclaimed Ackbar. "You must fly through the asteroid field to Research Station Shantipole, get inside undetected, and set the main generator to explode. I'll provide you with the detonite and timers myself. A 30-minute fuse should give you a reasonable safety margin. When the generator explodes it should destroy the entire station, and the prototype starfighters along with it. That explosion will be our signal to move the fleet into corridor G147. If you have not secured a combat vessel and begun your distraction maneuvers on the frigate, we shall try to escape anyway, but we'll be easy targets for the Imperial ship. Good luck, and may the Force be with you."

Almost before they knew it, the team found themselves once more in space aboard a flimsy, unarmoured repulsorlift vehicle known as an ‘Asteroid Hopper’. Whilst they had been preparing to depart, the Verpine techs had been working flat-out to reassemble Hate, this time with the addition of enhanced armour plating over the droid’s vulnerable circuitry. The Verpine Suskafoo had volunteered to go with them, also: he was familiar with Shantipole station and, although he refused to use weapons, he was an excellent pilot.

As they sped towards Shantipole station, the Hopper’s sensors picked up a suspicious transmission from ahead. Rapid analysis by crew revealed an Imperial Viper Probe moving steadily through the asteroid field, clearly searching for the Verpine fleet. Analysing its flight path, Vora realised that it would locate the fleet in a matter of hours! Quickly, the crew came up with a plan. As the Hopper lacked any weapons, Hate modified one of the detonite explosives so that it would explode on contact with the Viper droid. Once completed, the droid handed it to Kibu, who’d donned his miniature vac-suit. Clad in his bulky suit, Kibu would have looked ridiculous if not for the deadly explosive gripped tightly to his chest and the look of fanatical determination in his beady eyes. Hoisting Kibu onto its shoulders, Hate moved towards the airlock and began to cycle the locking mechanism. Meanwhile, Vora carefully edged the Hopper through the asteroid field, planning to get closer to the probot without it detecting them and give her comrades the best possible chance. But even the best pilots can be caught out and a random collision of two huge nearby asteroids sent showers of debris in their direction. Desperately manoeuvring to avoid the flying rocks, Vora came into full view of the Viper. Immediately, it detected them and began moving towards them, raining blaster fire on the fragile Hopper whilst signalling the Imperial fleet. Swearing colourfully, Glave rapidly hacked into the Viper’s security system and sent an error message back to the fleet. It wouldn’t fool them for long, but perhaps it would give them a fighting chance to escape.

As Vora sent the Hopper into a series of corkscrew manoeuvres, Hate and the vac-suited Kibu emerged onto the metal skin of the ship. Ignoring the rocks and the blaster fire flying around them, Kibu stuck out his tongue and screwed up his eyes, judging the movement of the Viper with the practised eye of the hunter. Seeing his chance, he let the detonite charge fly. It seemed to arc wide of the Viper, until at the last moment the Imperial probe jinked to avoid a flying rock...straight into the detonite charge. As the enemy droid was consumed in a huge explosion, Hate turned to the furry bundle held safely in its grip. Silhouetted against the expanding fireball, Hate spoke almost tenderly: ‘You are like a delightful random cruelty generator, Master, poisoning all you touch with your presence. You are a testament to all organic meatbags everywhere’. Kibu nodded sagely as Glave and Vora sent the Hopper speeding towards their target: Shantipole Research Station.