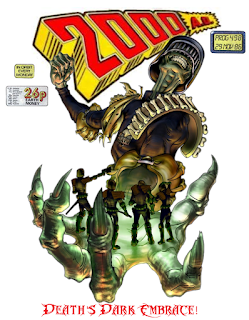 (inspired in part by the 'Dredd vs Death' console game and novelisation. I've used some sections of text in my write-ups, without permission)
Posted by Steve at 09:51 No comments:

Honest Abba sat hunched against the night air, listening to the rain pounding against the roof of the woodcarver’s hut. As you might expect, the building had been lovingly crafted by someone intent on building a home for himself and his family, out here on the frontier. All that work, wasted; Abba stifled a snort of derision. The woodcarver, whatever his name had been, had stood up to the local lowlives, a bunch of scumbags going by the name ‘the Redbrands’. To Abba’s way of thinking, the villager’s death had been his own fault. If he’d only kept his mouth shut, he’d probably be sitting here with his family, enjoying some dull evening chatter with his dull wife, watching his children growing and preparing them to follow after him as dull villagers of the future. Instead, he was no doubt moldering in a ditch somewhere, his family either dead likewise or bound to be sold into slavery or some similarly grim fate. Ordinary folk should know their place, reflected Abba. He liked to think that his chosen name, ‘Honest Abba’, was accurate but not in the way that people thought. He’d cheerfully steal a starving man’s last bite of food; it was, after all, what he was trained for. No; he took pride in being honest about the ways of the world. The strong or sneaky survived, and the weak perished. Real honesty was understanding that truth and living by it, always.

Soft sounds of sleep came from the shadows surrounding him. Kang muttered to himself quietly in a strange tongue as he slept, seeming to be conducting a one-sided argument as he clutched his spell book tightly to his chest. Briefly, he considered honing his skills by stealing the book, but after the last time Kang had threatened to set his insides on fire. Abba doubted he could really do that, but probably best not to find out. On the far side of the room, Og and Grax lay curled up together in the way of Half-Orcs, low rumbles emanating from both ends of them. Grax’s snoring in particular had a particular sub-sonic quality that made Abba’s sensitive ears itch. Both Kang and Grax had joined them after being freed as they went about murdering every goblinoid they could find in the Cragmaw cave. Kang was, well, mysterious. Grax however was more forthcoming about his past; apparently, he’d wanted to be some sort of bard, but had had his heart broken by some no-doubt foul half-orc female. As a result, he’d left his tribe and wandered the wilds for some time, apparently picking up some moderately useful skills on the way. Dulron slept apart from all of them, the sound of his armour scraping on the flagstones as he shifted slightly. Abba and Dulron had a strange relationship; although he could be as flexible as Abba when it came to necessary violence, at other times he was unshakeable in his moral judgement once he’d made a decision. Abba had decided to make it his personal goal to see just how unshakeable Dulron could be, and whether his morals could be made just a little more 'flexible'.

Abba thought back over the last few days.After slaying the goblins and taking all their stuff, the companions had continued on their way to Phandalin. They’d also found another lost soul in the cave, an old man named Sildar Hallwinter who’d been near death. Somehow, he’d survived and accompanied them to the frontier town. Abba had been in favour of this, largely because he’d offered to pay them. Once at Phandalin, the companions had made a point of collecting all of the money owed to them, and now they had quite a tidy sum that they’d carefully divided between them. Abba grinned to himself; he liked a challenge.

Phandalin had turned out to be yet another frontier town, full of honest, bluff sorts wilfully ignoring all of the horrific dangers around them in the belief that hard work and a steadfast heart would get them through. Abba didn’t object to this, as long as he wasn’t expected to do such things himself. No, what really galled him was the relentless optimism that shone in their ruddy, outdoorsy faces. Again, he stifled a snort of derision. But, as was often the case, all was not rosy in their little patch of heaven. The Redbrands had set themselves up as the muscle in this town and weren’t afraid to show it, as the woodcarver had found out. As a result, as they’d made themselves just unpopular enough for people to offer good money for them to die. Again, not something Abba or any of his companions had a problem with. Just that afternoon, Og had started an argument with some of the bruisers outside a grimy tavern named ‘The Sleeping Giant’. Although the fight had started badly, the arrival of Dulron, Kang and Grax had turned the tide and soon there were a number of corpses lying blood-soaked in the street. Despite the resulting bluster from the Townmaster, a blow-hard named Wester Tobin, the news had spread quickly and the companions’ reputations had been raised with the locals. On the positive side, they’d learned that the Redbrands holed up in a ruin on the eastern edge of town known as ‘Tresendar Manor’, and that some of the local urchins had seen a couple of ruffians using a tunnel below the cliff to enter and leave unseen. Less positive was the fact that they were certainly now marked for death by the Redbrands, hence the fact they were sleeping here for the night rather than in a comfortable bed in a good inn. Although they had not allowed themselves a fire or any lights, Abba warmed himself with the thought of what they might find at Tresendar Manor, and what rewards he may be able to spirit away whilst his companions were otherwise engaged. As he sat, deep in thought, the first rays of the sun began to lighten the sky. Abba moved from sleeper to sleeper, rousing them quietly. Time to face whatever dangers lay beneath Tresendar Manor…